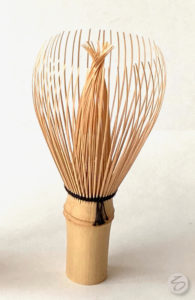 Cha-no-yu, 茶の湯, tea-’s-hot water, is made with ma-tcha, 抹茶, powdered-tea, that is blended with hot water using a cha-sen, 茶筅, tea-whisk. There are many different sizes and styles of chasen. The standard chasen is made of a single piece of aged ‘white’ take, 竹, bamboo, with a length of the 3 sun kujira-jaku, 鯨尺, whale-span, 11.5 cm.  Although the diameter of the bamboo varies, the standard Japanese diameter is approximately .7 sun kane-jaku, 曲尺, bend-span, or .55 sun kujira-jaku, 2.4 cm. It is a bit curious that the chasen is made using the kujira-jaku, because bamboo objects are usually measured with the kane-jaku, 曲尺, bend-span. The length of the kane-jaku ruler is 1 foot, 30.3 cm. The length of the longer kujira-jaku, 鯨尺, whale-span, is 15 inches, 37.8 cm. The kane-jaku is eight/tenths the length of the kujira-jaku: they relate to each other 8:10.

The chasen retains the bamboo’s natural fushi, 節, node, which indicates the direction of the growth of the bamboo. The root end of the bamboo piece is split into many tines, while the opposite end is kept solid to form a handle. The tines, hō, 穂, ear [plant], alternate between thick on the outside, and thin on the inside, and may be slightly curved inward. A doubled thread, ito, 糸, is interwoven two times, and a single thread around the outer tines to keep them separate from the inner tines, and slightly flared outward. The inner tines are shaped into a cone.  The thread is woven around the chasen 1.2 sun kujira-jaku from the handle end of the bamboo, and 1.8 sun kujira-jaku to the ends of the tines. The two ends relate to each other 8 to 10.

When the chasen is used to blend the tea and hot water, it is held in the right hand, and the tines put into the tea. With the tines made in the root end of the bamboo, it is as though the whisk was growing out of the tea. When the whisk is not in use, it is stood upright with the tines up and the handle down. The chasen in its resting position is upside down. If the tines of the whisk are bent down to form a circle, the diameter of the tines is 4.15 sun kujira-jaku.

The cha-sen, 茶筅, tea-whisk, has identified parts. The tines are called ho-saki, 穂先, head-fore. The central cone of tines is the cha-jimi, 茶染み, tea-penetrate.  The thread intertwined around the bamboo is called karami–ito, 絡み糸, entwine-thread. The ends of the threads are left long so that the thread does not unravel, and is called musubi–me, 結び目, tie-eye. The bamboo node is called a fushi, 節, node.  The handle is called a jiku, 軸, stalk. The thread in the pictured chasen is white for the most formal presentation of Chanoyu. The chasen is closely connected with the cha-kin, 茶巾, tea-cloth, which is made with white threads. The cut edges of the cloth are rolled and stitched, with some styles called take-fushi, 竹節, bamboo nodes.

The cha-sen, 茶筅, tea-whisk, has identified parts. The tines are called ho-saki, 穂先, head-fore. The central cone of tines is the cha-jimi, 茶染み, tea-penetrate. The thread intertwined around the bamboo is called karami–ito, 絡み糸, entwine-thread. The ends of the threads are left long so that the thread does not unravel, and is called musubi–me, 結び目, tie-eye. The bamboo node is called a fushi, 節, node. The handle is called a jiku, 軸, stalk. The thread in the pictured chasen is white for the most formal presentation of Chanoyu. 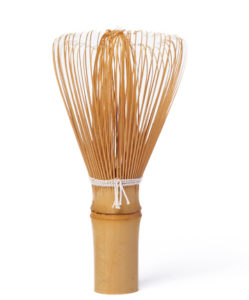 The chasen is closely connected with the cha-kin, 茶巾, tea-cloth, which is made with white threads. The cut edges of the cloth are rolled and stitched, with some styles called take-fushi, 竹節, bamboo nodes.When making the chasen, the bamboo is cut into sixteen sections that are cut into eight thin and thick tines which are chamfered on all four edges. Thread bound, pared, and curled. The number sixteen is a number symbolic of Infinity in Space, radiating outward in all directions, omnipresence. The handle of the whisk is called jiku, 軸, axis, which is also the scroll part of a kake-jiku, 掛軸, hang-scroll.

The chasen has two doubled threads, mo-men-ito, 木綿糸, wood-cotton-thread, intertwined counter-clockwise around, then two single threads intertwined. The threads around the base of the tines separate the outer tines from the inner tines.

The thread is called karami–ito, 絡み糸, entwine-thread, and ami–ito, 編み糸, braid-thread, and kumi ito, 組糸, unite-thread. The thread tassel, called musubi-me, 結目, tie-eye, establishes the shō-men, true-face. The threads are not tied in a knot, which is one of the reasons that the ends of the threads are left long enough so that thread will fray less. The threads, after winding, are cut with a knife so that they extend to the fushi, 節, node.

One of the important aspects of the thread is prevent water from the tines moving on to the handle of the whisk when it is stood upright when not in use. If the chasen were to be divided into the fifths, the thread section which is three-fifths of the whisk and is wet, is In, negative, and the handle that is two-fifths, is dry, and is Yō, positive. Three is a Yō number because it cannot be equally divided, and two is an In number because it can be equally divided.

Before the chasen is used to make tea, it is rinsed in hot water in the cha-wan, 茶碗, tea-bowl, which is called cha-sen tōshi, 通し, pass through. Depending on the formality of the presentation, the chasen may be examined two or three times, by raising it from the water and turning it before returning it to the bowl. The chasen is rinsed and examined at the conclusion of the presentation in an attempt to return things to their original condition.

The chasen is intrinsically associated with the chawan. The original chawan is the conical-form Ten–moku, 天目, Heaven-eye, from Song dynasty China. The Tenmoku chawan in the above picture is a standard Japanese copy of the original Chinese model. The rim of the bowl has a silver band, fuku-rin, 覆輪, cover-ring, to protect it from damage from a hot water pitcher that in Buddhist temples was made of bronze.

The height of the Tenmoku chawan, is 1.8 sun kujira-jaku, which is the same measurement as the tine section of a chasen, and the top of the bowl aligns with the thread of the chasen. It might be questioned whether this coincidence. The measurement of 1.8 sun kujira-jaku is also the height of a Rikyū gata chū-natsume, 利休形中棗, Rikyū-style middle-jujube, one of the most important Tea containers. 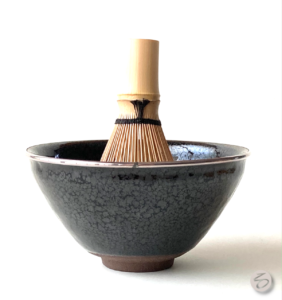 The chasen may be identified with the Go-rin-tō, 五輪塔, Five-ring-tower.  The length of the standard chasen is 3 sun kujira-jaku, which can be divided into six sun. Five 6-bu divisions of the chasen from the bottom of the tine end. The Go-rin, 五輪, Five-rings or principles, are Chi, 地, Earth, Sui, 水, Water, Ka, 火, Fire, Fū, 風, Wind, Kū, 空, Void. The bamboo is cut so that the root end of the plant is at the tine end of the whisk, as though when used it is as though the bamboo is growing out of the tea.

The following identifies one of the rin to parts of the bowl and the whisk:

Void / hollow end of bamboo; emptiness, a circle is the classic Buddhist symbol of enlightenment.

Fire / triangle of whisk; the chasen is identified with Fire according to the Eki-kyō/I Ching.

Water / water and tea in bowl.

The chasen is a single thing that is transformed, in part, into many things represented by the tines. The bamboo is cut and split into sixteen sections, then into eighty to one-hundred tines in the root-end of the bamboo, as though to show that the bamboo “roots” are “growing” out of the tea. 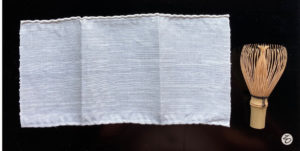 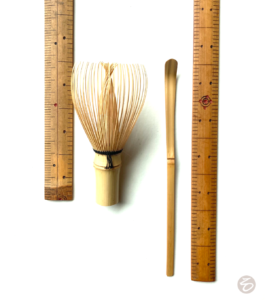 The structure of the bamboo chasen and the bamboo uchiwa,団扇, round-fan, is essentially the same. Both are a single length of bamboo retaining the node in the “opposite” direction, and are split into a multitude of tines separated by wound threads. The threads are kept long to prevent un-raveling. These tassels are likened to tsuyu, 露, dew, and lightning. The prime difference is that the uchiwa is pressed flat alternating tines, just as the tines of the whisk alternate.  The uchiwa has no particular role in Chanoyu, but may be displayed out of respect, or be offered by the teishu to the guests in the machi-ai, 待合, wait-gather, during warm weather. The uchiwa originated in China, while the sensu originated in Japan. ‘Uchiwa’ is wordplay on uchi–wa, 内輪, inner-circle, meaning the unity of the family.

There is also a strong resemblance between the chasen and the familiar folding fan, as both manifest sue-hiro, 末広, ends-wide, the fanning to infinity. The sensu can be closed, unlike the chasen. The teishu must move the chasen to whisk the tea, but the guest should refrain from using the sensu to cool oneself.  It is most interesting that the chasen is in a way the emblem of the teishu, while the sensu is the emblem of the guest. Both words include the sound of the word sen: cha–sen, 茶筅, tea-whisk, and sen–su, 扇子, fan-of, although the characters are different.

The number of ribs or hone, 骨, bones, of the folding fan is thirteen with two covers. The number thirteen in Buddhism refers to the Jū-san Butsu, 十三仏, Ten-three Buddhas, who are depicted in Buddhist mandala, man-da-ra, 曼荼羅, wide-weed-spread. It was essential for one to be a Buddhist in the Tokugawa era, so that hanging scroll with images of the Thirteen Buddhas was often displayed in the ome’s tokonoma. The sensu is for the teishu, a symbolic reminder of the connection of Chanoyu with Buddhism. Cha Zen Ichi Mi, 茶禅一, Tea Zen One Taste.