In Cha-no-yu, 茶の湯, tea-’s-hot water, the cha-sen, 茶筅, tea-whisk. The chasen is a length of bamboo that is cut into many tines at one end, and has thread wound around the bamboo to separate the outer ring of tines. By itself alone may represent the Go-rin-tō, 五輪塔, Five-ring-tower. The Go-rin, 五輪, Five-rings or principles, are Chi, 地, Earth,  Sui, 水, Water,  Ka, 火, Fire,  Fū, 風, Wind, Kū, 空, Void.

The Kanji for ring, 輪, also means the Indian concept of chakra, points or areas on the human body. The chasen is round to manifest the chakra which is a circle. The word Gorintō is composed of the Kanji 五for five, ring, tower. It is also symbolized by the lotus flower, which is also circular.

The chasen may have parallels with the Gorintō, with regard to the chawan.  The chawan is made of ceramic, which is of and made of earth, and so may be identified with the Earth aspect of the Gorintō.

Another Tea utensil is the Dai-Ten-moku Cha-wan, 台天目茶碗, Support-heaven-eye Tea-bowl: the base of the dai is called do-i, 土居, earth-is, Earth, the dish-like part is hane, 羽, wing, is Water [once this object was an incense burner and the dish held water], the cup that supports the bowl is hōzuki, 鬼灯, demon-lamp, is Fire, the tea bowl is Wind, and the tea is the Void.

Why bamboo?  Bamboo by nature is round, hollow, circular, and has septums called nodes. In Japanese the node is written, 節, called fushi, node.  Bamboo grows and has a natural manifestation of In and Yō. Why require the fushi?  There may also be wordplay intended, because in Japanese the word fushi can mean fu-shi, 不死, no-death, which is a word closely identified with Buddhism.

The chasen form is somewhat based on the fishing weir, sen, 筌. Sen no Rikyū’s name was Hō-sen-sai, 抛筌斎, Abandon-weir-abstain. Rikyū’s family business in Sakai was dried fish storage, and Rikyū gave up the business to devote himself to Chanoyu.  The Kanji for sen, weir, is composed of bamboo, ?, all, 全.  The Kanji 全  a is composed of eight, 八, and king, ruler, 王.

The chasen may be related to the hemp cha-kin, 茶巾, tea-cloth. Fiber, white.  The chasen is in a way a kind of basket, the thread is woven and intertwined around the tines, if only three times around. The cut edges of the chakin fabric are hemmed and stitched with thread in a technique called take-fushi, 竹節, bamboo-node, because of the resemblance to the two objects. In many presentations of Tea, the chasen rests on a chakin.

The chasen as a symbol of the Gorintō, is seen with the tines as the root end with the handle upright. The five principles are arranged with Earth at the bottom, followed upward with Water, then Fire, Wind, and the Void. Earth, Water and Fire are physical elements, whereas Air and the Void are non-physical. With the chasen, the thread wrapped around the bamboo, separates the physical from the non-physical. 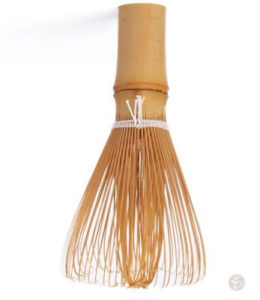 The chasen is symbolic of the Gorintō, as it is made of five units of .6 sun kujira-jaku.  From the tines upward: skin removed area, Earth – .6 sun and Water – .6 sun. Skin intact to thread, Fire – .6 sun. From the thread upward, Wind – .6 sun. The fushi is .3 sun from the thread, so that the fushi is in the middle of the .6 sun area. This area is identified with Wind, and Wind is manifest In and Yō, as it has a moving direction.  The fushi septum is intact, so that it manifests both In, as it can contain, and upside down which manifests Yō, as it cannot contain.

The tines are separated by the thread, keeping the wider tines on the outside, and the alternated slenderer tines on the inside. The outer tines flare outward, and the inner tines flare inward. Each circular group manifests sue-hiro, 末広, ends-wide, forming the number eight, hachi, 八. With a stretch of imagination, the inner and outer circle of tines forming the number eight, 八, could suggest the number 88, 八八, hachi-hachi. The inner and outer ‘number eight’ tines are joined at the same location as the thread winding. This might further suggest the number hachi-jū-hachi, 八十八, which is a number symbolic of Infinity in Space, and that can form the Kanji for kome, 米, rice.