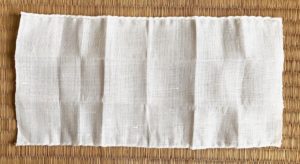 Over the past four decades, I have thought that there is a close relationship between the dō-gu, 道具, way-tool, of Chanoyu and Buddhist implements. That which prompts this thought is primarily in the presence of the lotus and its various aspects. It is the means in which one is reborn into Buddhist paradise.

Perhaps the most obvious object is the lotus, and, in particular, its seedpod, ren-niku, 蓮肉, lotus-flesh. The conical pod resembles the form of the Ten-moku ja-wan, 天目茶碗, Heaven-eye tea-bowl. The Tenmoku bowl holding tea is placed on the Buddhist altar along with other utensils that are based on the lotus forms. Black lotus seeds resemble natsume, 棗, jujube. 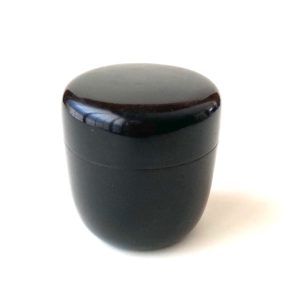 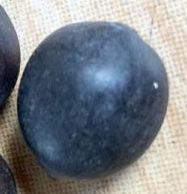 Simple aspects of the chakin include that white is the color of the purist lotus.  Lotus stems are made into fibers for fabrics.  The Tai-ma Man-da-ra, 当麻曼荼羅, Right-hemp Wide-weed-gauze, the oldest mandala in Japan, was made of lotus stem fibers. The most typical chakin is made of hemp, and it should be made of natural fiber. Silk is avoided in some Buddhist realms because the silk worm is killed to obtain the silk fiber.

In traditional Japanese arts and crafts fabrics are measured with the kujira-jaku, 鯨尺, whale-span, but often measurements are given in kane-jaku, 曲尺, bend-span. For example, the standard chakin is 5 x 10 sun kane, but in actuality, it is 4 x 8 sun kujira, because it is cloth to a weaver. The shin chakin is 8 x 8 sun kujira-jaku. The size and shape of the chakin gave some hints as to other connections. The most formal chakin is square, one by one shaku kane-jaku.  The number hachi-jū-hachi, 八十八, eight-ten-eight, is most auspicious, and is emblematic of the center of the world.

Part of the sculptural support for Buddhist images of Buddha and Bosatsu often includes an eight-petal lotus, just as the deity is depicted standing or seated atop a lotus seedpod. When examining the silk fuku-sa, 帛紗, cloth-gauze, it is in a way folded four times as to evoke eight sides, and the eight-petal lotus. It is then folded five times.

The chakin is not handled in such a way, however it is folded five times. When I examine and fold the fukusa, I think, “Wa Kei Sei Jaku” when examining the four sides of the fukusa, and think “Moku Ka Do Gon Sui,” the Five Elements, when making the five folds. The numbers 4 and 5 relate to the ratio of 8:10, which is found throughout Chanoyu utensils and relationships. 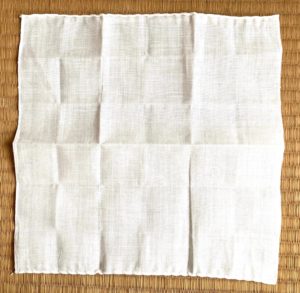 When folding the chakin, I wondered what was its physical appearance when opened.  When folding the shin chakin, it is folded in half to begin with, and then folded five times.  I discovered that when the shin chakin was unfolded, there was a square made of thirty-six squares.  These squares could be seen as four squares of nine squares each.  I immediately thought of mandara, especially the Kongōkai Mandara, which is the essential design of the tatami of a yojōhan chashitsu.

Concentrating on the shin chakin folded in half to form a rectangle, like the regular chakin, I noticed that each resembled the Ryōkai Mandara.  In many instances the Ryōkai Mandara are depicted together, one atop the other, creating, perhaps, a long hanging scroll.  The two mandara are joined together with the Taizōkai Mandara. Which is based on an eight-petal lotus, is above the Kongōkai Mandara, which is composed of nine squares.  They are joined where the edges of both are identified with the west direction.

The standard rectangular chakin has no obvious significance with its being folded into thirds, until it is unfolded, and reveals that folds create two squares of nine squares each. The unfolded chakin resembles the Ryōkai Mandara.

At the heart of the Ryōkai Mandara, is the central Buddhist deity, Dainichi Nyorai.  It is my belief that the teishu represents Dainichi, a supreme deity, who rules over the universe, as does the teishu of Chanoyu.  When the teishu actually prepares and presents Tea, he or she becomes the representative of Fudō Myō-ō, who is a wrathful manifestation of Dainichi.  This concept of the chakin is so new to me that I am still trying to comprehend the implications, and subtle connotations.