Tabako Bon and the Five Elements 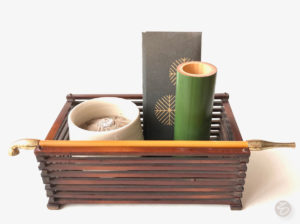 The utensils within the tabako bon, 煙草盆, smoke-plant tray, may be identified with the Go-gyō, 五行, Five- transitions, these are expressions of the five physical elements:

Tabako ire, 煙草入れ, tobacco-receptacle; the paper is folded into thirds in both directions creating nine areas.

Kū, 空, Void – tobacco changes from In to Yō., negative to positive.

The host, tei-shu, 亭主, house-master, places the tabako bon in front of the first guest, shō-kyaku, 正客, correct-guest. From the guest’s perspective, the hiire is located on the left side of the tray, and the hai-fuki on the right side. According to the arrangement of the Eki-kyō, 易経, Change-sutra, in Chinese the I Ching, fire on the left and water on the right, locates the guest in the north, the seat of deity.

The pipe is for the guest to smoke, and by lighting the tobacco in the pipe, the guest handles fire. In the word for host, tei-shu, 亭主, house-master, the character for shu, 主, is composed of king, 王, and dot, 丶, which is meant to be a symbol of fire. The character for shu, 主, is based on a lamp stand. Thus, the shu is the master of fire. Except for handling fire when building the charcoal fire, the host moves only one piece of burning charcoal. The host’s primary activity is handling water to prepare tea. The guest on the other hand when smoking handles fire. This act transforms the guest into the “master of fire.”

In Japan, a guest is treated with great deference, which causes them through actions and the presence of utensils to become the person in charge of activities. The host acts more like a servant to that master guest. Whether the guest smokes or not, the presence of the tabako bon shows the host’s intention that the guest is in charge of activities. The shōkyaku should pick up the hiire and handle it, to feel the warm spirit of the teishu, as should each of the other guests. In the presentation of usu-cha, 薄茶, thin tea, the guest must ask the host to finish making tea or the host would continue. The guest is in charge.

The relationship between fire on the left and water on the right is found also in the arrangement of the furo on the left and the mizusashi on the right, which metaphorically places the host in the north. The guest is identified with the In principle, handles Yō fire in the pipe, and thereby becomes the shu, master of fire and tei-shu, 亭主, house-master.

Changes: wet tobacco is plant material that is dried. It is put into a metal cup, and is lit with fire and becomes fire. The tobacco changes to smoke which is inhaled as a form of incense. Chemicals in the tobacco affect the brain. The tobacco turns to ash, and is disposed-of in water.