The sensu is an essential part of Chanoyu. It is the emblem of the guest, just as the fukusa is the emblem of the host. I wondered why the sensu for men and women in Chanoyu are those particular sizes and styles. The sensu for a man is 6 sun kane-jaku, and that for a woman is 5 sun kane-jaku. Six is an In number to complement his Yō, and five is a Yō number to complement her In. Special sensu may be 7 sun kane-jaku, as well as other sizes.

Both of the sensu for men and women have the same number of ribs, hone, 骨, bone, independent of the outside guard covers. The total number of ribs is 13. There are many things that are in groups of 13. Numbers have great symbolic significance in Japanese culture. Perhaps the sensu is related to folding books including sutras.  The number thirteen is especially important in Buddhism; there are thirteen Buddhist deities called Jū-san Butsu, 十三仏, Ten-three Buddhas.

In addition, the sensu has 14 paper folds making a total of 28 ‘pages.’ With the addition of the cover guards, there are a total of 30 surfaces.  Also, there are usually 30 sheets of paper in a pack of kaishi.   One of the most familiar sensu of Chanoyu has the Rikyū Hyakushū, which is at the center of the Sen Chadō families. The Heart Sutra, Hannya Shingyō, has 28 chapters, and later 2 chapters were added making a total of 30 chapters. The outer parts of the sensu may act as the covers for the sutra ‘book’ containing 28 chapters. There are 13 chapters in the Ji-zō , 地蔵, Earth-treasure, Sutra. The sensu used in Chanoyu are made of bamboo strips for the hone, 骨, bone, as are many fans. Sutras and other ancient documents were often made of sheets of bamboo strung together.

The guest must carry the sensu when in the ro-ji, 露地, dew-ground.  I believe that the roku-sun sensu has a strong connection with the six metal rings, roku-kan, 六鐶,  of the shaku-jō, 錫杖, tin-staff, of Jizō. In addition, I believe that Jizō helps guide the guest in the roji. The same is true with Rikyū’s ro-ji tsue, 露地杖, which has nana-fushi, 七節, 7-node, or roku-kan, 六間, six-intervals. In the tearoom, when greeting one another, the sensu is placed on the floor in front of the hands in a position of respect. The guest places the sensu on the floor just behind the feet, which identifies the location of that particular person.

In traditional Japanese craft, measurements are determined using the shaku, 尺, span, which originated in the span of the human hand between the thumb and forefinger. In former times, the length of the shaku varied until two lengths were established, the kane-jaku and the kujira-jaku. The kane–jaku, 曲尺, bend-span, which is equivalent to a standard foot of twelve inches, and the kujira-jaku, 鯨尺, whale-span, which is the equivalent to 14 7/8 inches. Certain artists and craftsmen use either shaku in their work. To avoid possible confusion, in modern times measurements are usually given in centimeters. A shaku is divided into ten sun, 寸, which is divided into ten bu, 分, which is divided into ten rin, 厘.

A typical sen su is made of bamboo cut into thin lengths called ribs in English, and in Japanese is hone, 骨, bone. These are held at one end by a pivot called a kaname, 要. The number of hone varies greatly, and the number of hone of sensu for Chanoyu is thirteen ribs. Japanese folding fans are made in a myriad of sizes, however, the standard size of the fan used in Chanoyu is established at six sun for men and five sun for women.  In addition to these two sizes, there are sensu that are seven sun long used by some teachers, and it is likely that it is the fan used by the teishu.

The sensu is in theory the radius of a circle, which depends on the function of the kaname, 要, pivot. The kaname itself is now made of plastic for small fans has a diameter of one bu kane-jaku. The following are the kane-jaku measurements of the sensu from the kaname:

Numbers have great symbolic significance in Japanese culture. The number thirteen is especially important in Buddhism, as there are thirteen Buddhist deities called Jū-san Butsu, 十三仏, Ten-three Buddhas. They figure prominently in the memorials of departed spirits. Such fans, are covered with paper, kami, 紙, that has a double thickness that allows pockets to accommodate the narrow ribs. The guard covers are the outer parts of the folding fan that may resemble the ribs or be the size and shape of the leaves.

The essential form of a folding fan, both opened and closed, is an emblem of infinity, as it is narrow at one end and wide at the other end. This is called sue-hiro, 末広, ends-wide. This is especially evident when the fan is open wide, beginning at the kaname and extending out to infinity. Each double leaf forms a suehiro. 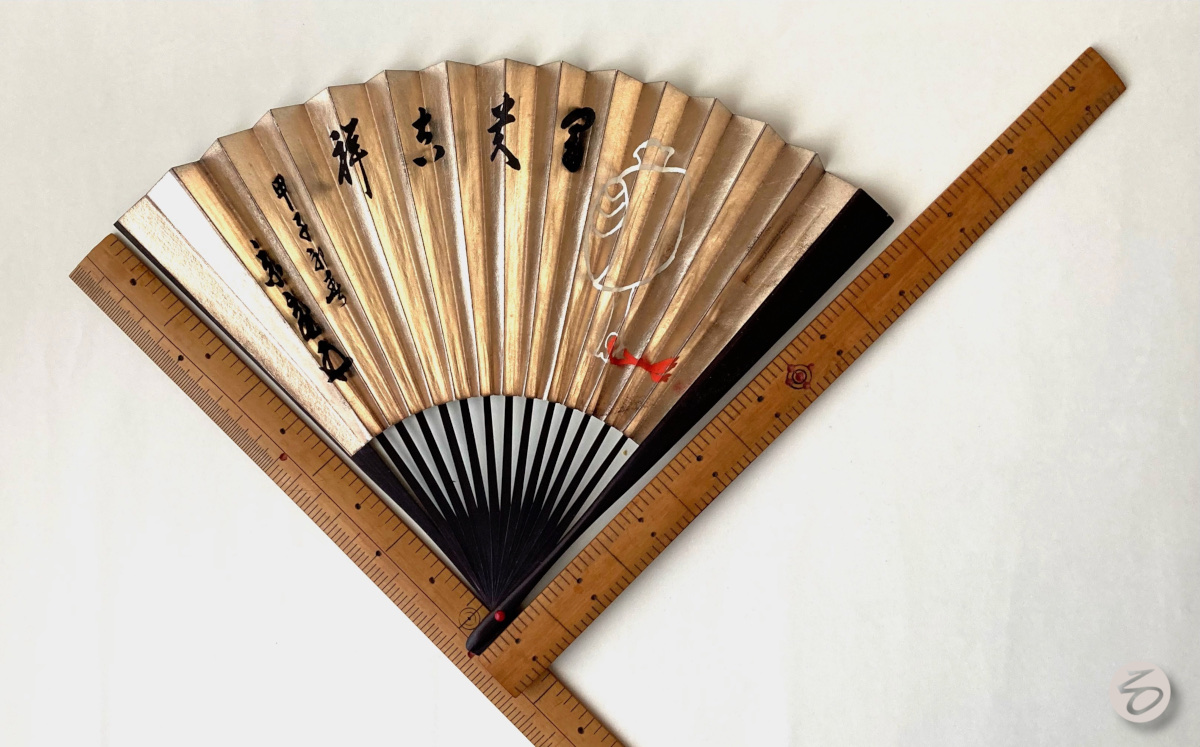 The sensu used in conjunction with Chanoyu should never be used to cool oneself. There are often written phrases or words on the fan that come from Buddhism or other beliefs. They are equivalent to sacred texts and therefore it would be most unseemly to be using them and cooling devices. The above sensu has a length of 7 sun kane-jaku, or 5.6 sun kujira-jaku. The width of the un-papered part of the sensu measures 3.1 sun kane-jaku. The width of the papered part of the sensu measures 3.1 sun kujira-jaku. The un-papered and papered parts of the sensu relate to each other 8 to 10. This relationship is the same for most Japanese sensu regardless of the actual length of the sensu.

The numbers 8 and 10 in Japanese, hachi, 八, eight, and jū, 十, ten, can be read ya–so, 八十, meaning many, as in ya–so gami, 八十神, 8-10 gods. The numbers can also be read ya-ata or ya–ta, 八十, but is often written with the Kanji, ya-ta, 八咫, eight-span. The Kanji, ata, 咫, span, is the measurement between the outstretched thumb and middle finger. It is symbolic of ten or completeness.

Although they would never be used in Chanoyu, there are fans made of metal, te-ssen, 鉄扇, iron-fan. Some fans are spread open, while others are closed. They are used as a weapon and for protection. They also may be seen as a parallel to the pair of hi-bashi, 火箸, fire-rods. Although the fan is never used to cool oneself, because it can cause air to move, the fan is identified with the principle of Wind, one of the five prime aspects of the Go-rin, 五輪, Five-rings: Earth, Water, Fire, Wind, Void.

When sitting in the proper place in the tearoom, why does the shō-kyaku, 正客, true-guest, have his or her sensu have its kaname, 要, pivot, toward the tokonoma? The toko-no-ma, 床の間, floor’s room, is an elevated place of honor, where words, pictures, flowers, and other fine objects are displayed, representing honored spirit.The other guests have their sensu with the kaname away from the shōkyaku. The shōkyaku represents the spirit of the tokonoma, while the other guests attend the shōkyaku as the representative of the spirit in the tokonoma.  When a guest is sitting in front of the tokonoma to see and appreciate the objects in the tokonoma, the sensu is placed on the floor in front of the knees. When first entering and moving around in the tearoom, the guest carries the sensu in the right hand, clasping the kaname. Therefore, when sitting or being in front of the tokonoma or in a position of respect and greetings, the sensu, being held in the right hand, is placed in front of the knees with the right hand. The sensu acts as a ke[tsu]-kai, 結界, join-world, and as such both separates and joins anyone or thing one is in front of. In a church the rood screen acts as a kind of kekkai.

The sensu is an emblem specifically of the kyaku, the emblem of the teishu is the fuku-sa, 帛紗, cloth-gauze. In addition to the sensu, the kyaku, as well as the teishu, has a pack of folded paper called kai-shi, 懐紙, heart-paper. Kaishi is made in a multitude of sizes and styles, and may be simple plain white papers, preferred by Sen no Rikyū, or fancifully decorated. Kaishi are made especially for Chanoyu in packs of thirty sheets.

The standard pack of kaishi has thirty sheets of paper. Perhaps the number thirty has special significance, and maybe is associated with Buddhism. The Heart Sutra, Hannya Shin-gyō, 般若心経, has twenty-eight chapters, and with covers is has thirty ‘pages’.

The folding fan has Rikyū’s teaching in the form of one hundred poems printed on paper mounted on thirteen bamboo hone, 骨, bone, ribs; L. 5 sun kane-jaku. In the realm of Chanoyu, the length of a sensu for a woman measures 5 sun kane-jaku, and the length of a man’s sensu is 6 sun kane-jaku. The number 5 manifests the Yō principle, which complements the female In principle. The number 6 is identified as an aspect of the In, 陰, negative, principle which complements the male Yō principle.

The width of the paper is 3.4 sun kane-jaku, and the un-papered bamboo length is 2.6 sun kane-jaku. These measurements have a secret connection. The paper width of 3.4 sun kane-jaku when transposed to kujira-jaku is 2.6 sun kujira-jaku. The measurements of the bamboo and the paper relate to each other 8 to 10, which manifest the concept of ya-ta, 八咫, eight-span, symbolic of infinite vastness, as with the Ya-ta Kagami, 八咫鏡, Eight-span Mirror, the sacred Shintō representation of the sun goddess, Ama-tera-su, 天照, Heaven-brightener.

The sensu that is used in Chanoyu may represent the Heart Sutra of Buddhism. The title of the Heart Sutra in Japanese is “Jū-san Butsu Shin-gon Han-nya-shin-kyō,” 十三佛真言 般若心経, 13 Buddha True-word Carry-young Heart-sutra.  ‘Hanya’ is Japanese for the Buddhist concept of prajna, the wisdom required to attain enlightenment.

A Buddhist sensu often has the Heart Sutra written on it, and this sensu has a standard length of 7 sun kane-jaku. The number of hone, bones, ribs, varies between 23 to 27 with two covers: the number of vertical lines of text varies between 23, as above and 28. A sensu from a shop that specializes in Buddhist supplies has 27 hone with 27 lines of text. The number thirteen is also identified with the 7-day periods of mourning after the death. This may have a connection with the 7-sun kane-jaku sensu.

An ‘accordion’ folding ‘book’ with the Heart Sutra printed in Japanese measures 29 x 5.7 sun kane-jaku, when fully opened, when closed it measures 5.7 x 2.4 sun kane-jaku. The book has twelve pages. The line-framed text in the lower picture has twenty-three vertical lines of text that is organized into three lines of text on each page.  A folding paper book is more easily handled than a long paper scroll. A picture painted on a long piece of paper should not be folded, so the scroll is appropriate for certain objects. The folded book is like a folding fan, which can have both text and pictures.

The number of fourteen ribs of Fukushima’s sensu increases the standard number of thirteen ribs. Perhaps this can be explained by its connection with Rinzai Buddhism. The Rinzai sect is divided into fourteen branches, and Tōfukuji is the head temple of the Tōfukuji branch of Rinzai Zen Buddhism and number four of the Five Mountains of Rinzai Zen in Kyōto. This may be the reason for the fourteen ribs of Fukushima’s fan, and he was the chief abbot of Tōfukuji. Whether it is true or not, it does imply the connection between the sensu and Buddhism.