The furo and the ro are rarely, if ever, used together, however there are so many similarities and differences that examining them together is quite revealing. One great difference is that the furo/kama manifests the Yō, 陽, positive aspect, and the ro manifests the In, 陰, negative aspect.

The standard fu-ro, 風炉, wind-hearth, that uses a go-toku, 五徳, five-virtues, to support the kama, 釜, kettle, was originally made of tetsu, 鉄, iron, as was the kama, 釜, kettle. Furo are made in various materials; iron, bronze, ceramic, wood, etc. A furo is essentially a large bowl that has an opening in the front, hi–mado, 火窓, fire-window. The furo, for support and stability, has three feet, mitsu-ashi, 三足, with one foot at the front. The furo contains a bed of fine wood ash, hai, 灰, to support and provide air for a charcoal fire, sumi-bi, 炭火. The ash bed is traditionally formed into two linear crests parallel to the front, that is called ni-mon-ji, 二文字, two-letter-character.

The gotoku is usually made of iron, and has three upright posts with inward pointing tsume, 爪, talon. The gotoku is set in the ash bed with two talons at the front. This is opposite the orientation of the furo’s three feet. Chanoyu was greatly influenced by the system of divination of the I Ching, Eki-kyō, 易経, Change-sutra, in the center of the ash bed, is drawn the Ekikyō trigram for Kan, ☵, Water, which metaphorically locates the furo in the north, the teishu in the south facing north.  The furo is most often placed on a black-lacquered, square wooden board, shiki-ita, 敷板, spread-board.

The charcoal fire is started with a base fire, shitabi, of three pieces of burning charcoal put in the center of the ash bed in the furo. The charcoal pieces are blunt-cut cylindrical gi-tchō, 毬打, ball-hit, that are likened to mallet heads. When looking at the cut sides of the piece of charcoal it is a circle, In, negative, and from the side it is a rectangle, Yō, positive. Almost everything has both In and Yō aspects, like a bowl.

One piece of burning charcoal is placed somewhat close to the front, and then two pieces of charcoal are placed behind it. This arrangement of three things is similar to the three feet of the furo, and opposite the talons of the gotoku. Prior to putting the first pieces of unburned charcoal next to the three burning shitabi, the piece of burning charcoal at the front is moved to be behind the other two pieces. This changes the direction of the fire from south to north.

The bowl is filled with a bed of very fine wood ash, hai, 灰, that is shaped into ni–mon–ji, 二文字, two-character-letter, set with a three-point iron go-toku, 五徳, five-virtue.  The furo is placed on a black-lacquered, square, wooden shiki-ita, 敷板, spread-board, to protect the tatami from the heat of the fire.

The furo manifests the three primal shapes. The circle is the round furo. The gotoku with its three talons is the triangle.  The square is less obvious. It might be imagined that it is the square board that supports the furo. However, the four corners are present in the ash bed. The nimonji does not form an exact square, but the term is shikaku, meaning four corners, and the ash bed form has four corners where the ash crest touches the walls of the furo.  The ash bed in the ro also has four corners, with one corner in the middle of each of the four walls. The ro usually has a gotoku set in the ash.

The charcoal fire in the furo is the heat source for yu, 湯, hot water, in the kama, which means that the kama should also be included in the symbolism. The furo and kama are the physical embodiment of the Go-gyō, 五行, Five-transitions: Moku, 木, Wood; Ka, 火, Fire; Do, 土, Earth; Gon, 金, Metal; Sui, 水, Water.

The symbol for Wind is a bowl, hachi, 鉢, and the furo itself is a bowl.  The symbol for the Void, which is undifferentiated In and Yō, manifesting combined water and fire, is a teardrop.  The hi-mado is a void, and allows air to enter the fu-ro, 風炉, wind-hearth. 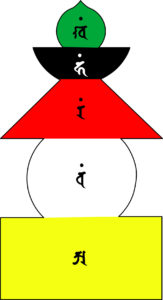 Primary colors, which are near sacred to Buddhism, are manifested in the Go-rin-tō, 五輪塔, Five-ring-tower: Earth, cube – yellow, Water, sphere – white, Fire, pyramid – red, Wind, bowl – black, and Void, teardrop – green/blue.  The mayu buro is a black bowl. In general, may people who enjoy Chanoyu feel that the ideal cha-wan, 茶碗, tea-bowl, is a kuro-Raku, 黒楽, black-pleasure.

The three geometric shapes were immortalized in a well-known drawing by the Zen Master and artist, Sen-gai Gi-bon, 仙厓儀保, Hermit-shore Righteousness-protect, 1750-1837.  He identified his drawing as “The Universe.”   The following are the meanings of the images:

◯ no as well as ‘no limit,’ △ is one, □ is many, these three together are universe, heaven-space.

In this famed drawing, Sengai followed the literary tradition of Japan of starting to write and draw from the right and then to the left as depicted above.  From a western perspective, the drawing of the three shapes would start at the left and proceed to the right, which is in accord with the western way of reading and writing.  Thus, it is important to understand that Sengai starts with the circle.  This is in keeping with Zen concepts, the circle is everything and nothing.

In the structure of the Gorintō, acknowledgement of the forms begins at the bottom, the square/cube of Earth, upon which rest the circle / sphere of Water, then the triangle / pyramid of Fire. The small, square shikiita of the furo is adapted from the dai-su, 台子, support-of, which is composed of a relatively large baseboard called a ji-ita, 地板, earth-board, and a similar upper shelf, ten-ita, 天板, heaven-board, supported by four corner posts, hashira, 柱. So, that in fact the, the shikiita for the furo is identified with the jiita and therefore, symbolically, with the earth. The Kanji for hashira, 柱, also is used as the counter for deities. The Kanji is composed of moku, 木, tree, and nushi, 主, master.

A circle is a single line that is drawn innumerable times by Buddhists, and is called en-sō, 円相, circle-aspect. The circle can evoke the eighth picture of the Jū-gyū-zu, 十牛図, Ten-ox-pictures. The ten pictures relate the development of Enlightenment in the guise of the story of a boy seeking his lost ox. The eighth picture is a blank circle signifying that all is nothing.

The ash within the rodan is mounded up against the middle of each of the inside of the four the walls. The ash is raked away and up from each of the four corners creating ‘valleys’. The distance between each ‘valley’ to the top of the crest of the peak is 5 sun kujira-jaku. The total distance from valley to peak to valley on each wall measures one shaku kujira-jaku. The relationship between the 8 sun width of the wall to the peak and valleys one shaku or 10 sun kujira, is 8:10. The ratio of 8 to 10 may be identified with ya-ta, 八咫, eight-span, which refers to the sacred Shintō Ya-ta Kagami, 八咫鏡, eight-span mirror, a symbol of infinite vastness.

The triangle may be found in the ash bed of the ro. The shape created by the peak and valley is essentially a triangle. However, the peak is more correctly a pyramid. A more obvious triangle is created by the gotoku that supports the kama in the ro, just as in an open furo.  At times there is no need of a gotoku in the ro when the kama is suspended from the ceiling, tsuri–gama, 釣釜, suspend-kettle, or when the kama is supported on small, thin blocks of wood set on the sides of the rodan: suki-gi gama, 透木釜, through-wood kettle.

What of a circle, if indeed the furo and ro manifest the three shapes of circle, triangle and square?  In the furo, the square is formed by the nimonji ash crests, whereas the ro itself is the square. The shape or form of the ash in the ro might be likened to a circle. The peaks along the walls of the rodan form a kind of square as well.  This is not exactly true. The peaks and valleys create edges, suggesting the eight directions, and creating the ‘center of the world.’

When being taught Chanoyu at Urasenke in Kyōto, there were countless times that I practiced or watched the sumi te-mae, 炭手前, charcoal hand-fore.  Spooning the shimeshi-bai, 湿し灰, damp-ash, over the sides of the ash bed, I let the ash fall from the hai-saji, 灰匙, ash-spoon, according to instructions, from one ash peak to another in a straight line. Because of the presence of the gotoku, the line was not straight as I avoided letting the ash fall on the top of the prongs.  Sprinkling ash is called maki-bai, 蒔灰, sprinkle-ash.

I always felt inadequate or uncomfortable at not letting the ash fall correctly or as I had hoped. It has begun to dawn on me that the line may not be straight.  Frankly, I don’t remember being taught that the line was or was not straight, or where the ash should be sprinkled. After considerable research, which was difficult as there were few sources in English, it became evident from some illustrations, that the line is in fact curved, arcing out from the center of the rodan.  This may be the remains or suggestion of a circle.