Tying the Sanada himo, 真田紐, True-ricefield braid, ribbon of a hako, 箱, box, containing cha-dō-gu, 茶道具, tea-way-tool. Paper may cover the box to protect writing on the lid. Writing and identification on the front of the box is the shō-men, 正面, true-face.  The style of braid bears the name of Sana-da Masa-yuki, 真田 昌幸, True-field, a warlord of the 16th and 17th century, whose sword handles were bound in cords of such weaving technique. 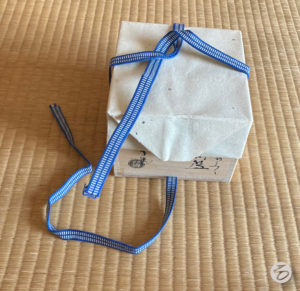 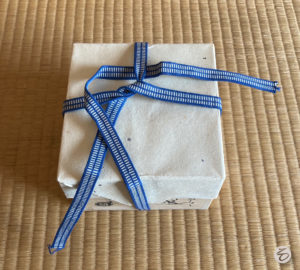 The front braid is laid over the center braid, and folded and turned under the center, and moved toward the right and above the right braid. 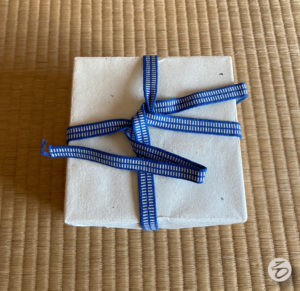 The loose braid at the front is folded toward the right, and folded about two-thirds back on top of itself. 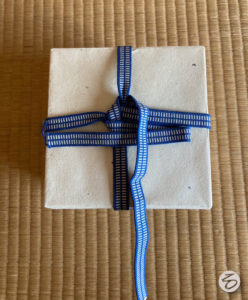 The loose braid at the far right is folded forward over the center. 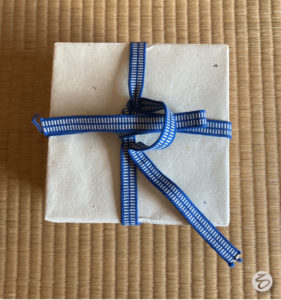 About two-thirds of the loose front braid is tucked under only the doubled braid that is laid over the center. 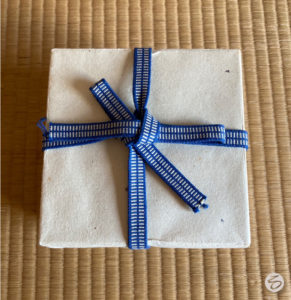 After the braid is tucked under the doubled braid, the bow is pulled gently at both double-folded ends of the braids to close the bow. It should be remembered that the braid is folded so that the bow will be flat. 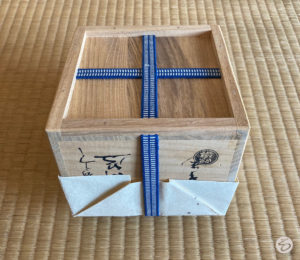 The bottom of the box is recessed so that a similar box can be stacked on top of the box on the bottom the bow filling the recess.