The flowers of many hydrangea plants in Japan often fade and wither, whereas in New England, some hydrangea flowers, dry, hold their forms, and sustain some coloring, making them a favorite for flower arrangements.  The leaves of certain hydrangea in Japan are made into a beverage called ama-cha, 甘茶, sweet-tea, that is ladled over images of the infant Buddha on Hana-matsuri, 花祭, Flower-festival.

Yatsu-hashi, 八ツ橋, eight-bridges, are walkway bridges made of wood planks supported on low posts through iris pond gardens. Wooden planks are supported on crossbeams held by posts, with extended by additional wooden planks laid on or abutting the ends of the existing planks, which forms the Japanese Kanji for eight, hachi, yatsu, 八.

There may be a misunderstanding that the reference to eight always means endless or multiple, whereas the wooden plank boards cross and make the number 八.  Hana-shō-bu, 花菖蒲, flower-iris-rush, Japanese irises, the famed irises of Japan that have been depicted in countless paintings and drawings.

There are two main kinds of peonies in Japan, shakuyaku and botan. Shaku-yaku, peony-medicine, Chinese peony (Paeonia lactiflora)​, is an herbaceous plant. Bo-tan, 牡丹, male-red, is a so-called tree peony, that has a wooden trunk.

The flowers have an extraordinary beauty known world-wide, but it is the root of certain tree peonies that have been an efficacious medicine that has been used in China for centuries. The botan is perhaps that most often depicted on fabrics originating in China and used profusely in Japanese design and fabrics, which have roots in Chinese design and symbolism. In fabric design the botan is accompanied by scrolling vine called bo-tan Kara-kusa, 牡丹唐草, male-red Tang-grass. This pattern is present on many kake-mono, 掛物, hang-thing, especially those with Buddhist writings and imagery.

Another type of dogwood is kousa that in Japanese is called, yama-bō-shi, 山法師, mountain-law-master, kousa dogwood (Cornus kousa); Japanese flowering dogwood. The flower resembles a hat worn by Buddhist monks.

Iris in Asian medicine; for many centuries, the Chinese have made use of the rhizome of the Iris pallasii and Iris japonicae for digestive concerns, and inflammation and throat disorders.

May 3 Lunar 5/5 Tan-go no Se-kku, 端午の節句, Start-horse’s Divide-passage. Old calendar Boy’s Day. Tan-Go no Se-kku, 端午の節句, Begin-Horse Divide-passage, is lunar festival, held on the fifth day of the fifth lunar month, which in 2022 is June 3rd. This date more closely coincides with Bō-shu, 芒種, Grain beard seed, occurs on June 6th. Bōshu is one of the twenty-four seasonal divisions of the solar year, and begins the lunar month of the Horse, which is the true source of the festival, Tan-go, Begin-horse. In 2022, the Tango festival held on May 5 actually begins the lunar month of the Snake, Mi, 巳. However, grand celebrations are held on May 5, and some attention is paid on the lunar 5/5.

May 11 Nyū-bai, 入梅, Enter-apricot; start of the rainy season (in Kyōto), which is called tsuyu, 梅雨, apricot-rain. Time to make ume-shu, 梅酒, apricot-alcohol, popularly called plum wine: made with green ume, shō-chū, 焼酎, fired-sake, distilled spirit made from sweet potatoes, rice, etc, and rock sugar, and aged for at least one year – the flavor and quality improve the longer it is aged. Once it was regarded as a medicine that was taken daily in small doses. Umeshu is seldom served at a Tea gathering, but may be used in preparation of some foods.

The preferred fruit for making ume-shu, is the nan-kō-ume, 南高梅, south-high-Japanese apricot, which has a white flower, haku-bai, 白梅, white-Japanese apricot. The unripe ume should not be eaten as it can be slightly toxic, they must be aged or cured. The stones of apricots, cherries, plums, and peaches contain a compound called amygdalin, which breaks down into hydrogen cyanide when ingested, and it is poisonous.

This is also the time to make ume-boshi, 梅干, apricot-dry, green apricots are blended with sea salt, weighted, and aged for a week. For color and flavor leaves of shi-so, 紫蘇, purple-resuscitate, (Perilla frutescens var. crispa, beefsteak plant). The seasoned fruit is dried in the sun for three days or so, and turned often. Both of these ancient staples should be made by a pre- or post-menstrual woman, with the aid of a virgin lad. Purity is of the utmost necessity.

The Japanese people historically are fond of things that are white and turn red, and vice versa. Green, like certain shrimp that turn red when cooked, is also likened to white, and therefore green ume are aged with shiso to make them red.

The Japanese ume is Japanese apricot (Prunus mume), and is called a plum. It is not a plum, which is commonly smooth-skinned, but has a fuzzy skin that is like an apricot. This tree is one of the three friends of spring: shō-chiku-bai, 松竹梅, pine-bamboo-apricot, that is also an exceedingly popular design motifs for the New Year, as the three represent aspects of longevity, resilience, and endurance against adversity.

The word tsuyu has several meanings: tsuyu, 梅雨, apricot-rain, which is also read bai-u. Tsuyu, 汁, broth, soup, juice, sap, etc. Tsuyu, 露, dew, open, enlightenment, etc. Tsuyu, 霉, mildew, mold, During the rainy season, mildew is an on-going blight in such humidity. ‘Plum rain’ began in ancient China, with the rainy season in the fourth and fifth lunar months, the plums turned yellow and fell, and the moisture evaporating from the trees turned into rain.

The rainy season is called go-gatsu-ame五月雨, five-month-rain, which is also read samidare, however, the reading has no true connection with the Kanji used to write it. The word samidare is possibly derived from sa(tsuki)-mi-dare, 五(月)水垂, five-water-fall. The name of the lunar fifth month is Sa-tsuki, 皐月, Swamp-month, the time of flooding the ricefields.

According to tradition, the tsuyu ends in Kyōto on July 17 with three claps of thunder over the hills of Higashi-yama, 東山, East-mountain, and at the end of the Gi-on Matsuri, 祇園祭, God-garden Festival. The end of the rainy season often occurs around the start of the lunar 6th month, called Minazuki, meaning waterless month, as the rain has ceased.

Horse hair can be used in different ways. The ho-ssu, 拂子, sweep away-of, is a fly whisk with a wood handle and the long tail hair of a horse, cow, yak, etc, to shoo away insects and other pests without injuring them.  It is an emblem of a Buddhist priest or monk of high rank.  It is symbolic of ridding one’s mind of bothersome thoughts and ideas. Daruma is acting as would one of the vengeful Buddhist deities called Dharmapala, Daruma-hara-ō, 達磨波羅王, who defend and guard Buddhist followers from danger and enemies. Omotesenke displays a hossu for certain occasions. 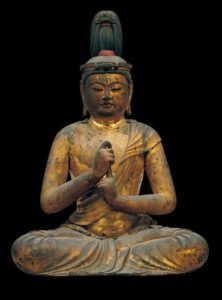 This chawan, as with many similar works, is identified as being inspired by the potter No-no-mura Ninsei, 野々村仁清, Field-field-town Benevolent-pure, and are labeled Nin-sei utsushi, 仁清写, Benevolent-pure copy, although the particular design is not actually created by Ninsei.  The theme of the design may be inspired by the phrase, ‘Me ni ao-ba yama hototogisu hatsu katsuo’, 目に青葉山時鳥初鰹, eye in green-leaf mountain time-bird (cuckoo) first bonito.  The expression is related to three of the five senses: seeing, hearing, and tasting. The bird in the painting more closely resembles a Japanese nyū-nai-suzume, 入内雀, enter-in-sparrow, (Passer rutilans), russet sparrow.

Little is known about Ninsei other than he was born No-no-mura Sei-suki, 野々村清すけ, Field-field-town Pure-?, in Tanba, was an acknowledged as a fine potter, and whose dates are circa 1640s to 1690s. He established a ceramic kiln in front of the gate to Ninnaji, 仁和寺, Benevolent-harmony-temple, in Kyōto, and included Nin, 仁, Benevolence, in his name. His fine craftsmanship and colorful designs greatly influenced the ceramic wares of Kyōto, and especially ceramic arts associated with Kiyo-mizu–dera, 清水寺, Pure-water-temple.