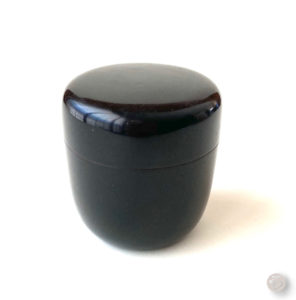 The height of the chū–natsume is 1.8 sun kujira-jaku. Lacquer artists traditionally use the kujira-jaku for their measurements. The diameter is 1.8 sun kujira, which is equal to the height. The Rikyū-gata chū-natsume is used to determine the distance between certain Tea utensils. The Japanese Kanji for the number18 is jū-hachi, 十八, ten-eight, and can be written to form the Kanji for ki, 木, tree, which is symbolic of life.

The lid overlaps the upper edge of the container in a style called ya-rō buta, 薬籠蓋, medicine-basket lid, so that the container looks like a solid object. The Rikyū-gata chū-natsume is made of turned wood lacquered black with a mirror finish called shin-nuri, 真塗, true-lacquer. The lid joins the body one/third from the top. The height of 1.8 sun divided into thirds, has the height of the revealed body is 1.2 sun from the bottom, the height of the lid is .6 sun.

The natsume, Ziziphus jujuba, is a shrubby tree with many long, threatening thorns. The Kanji for natsume, 棗, is composed of the Kanji, 朿, meaning thorn. When two are placed one atop the other, the meaning is the jujube. When two are placed side by side, toge, 棘, the meaning is thorns. There is some thought that the jujube branches were the crown of thorns placed on the head of Jesus. The etymology of the word ‘natsume’ is taken from natsu-me, 夏芽, summer-bud, and the tree buds sprout in summer.

The fruit of the natsume/jujube has been an important part of Chinese medicine for centuries. Jujube has a wide range of pharmacological activities in nervous system, cardiovascular system, as well as anti-oxidation and anti-cancer properties, aids in insomnia and forgetfulness.