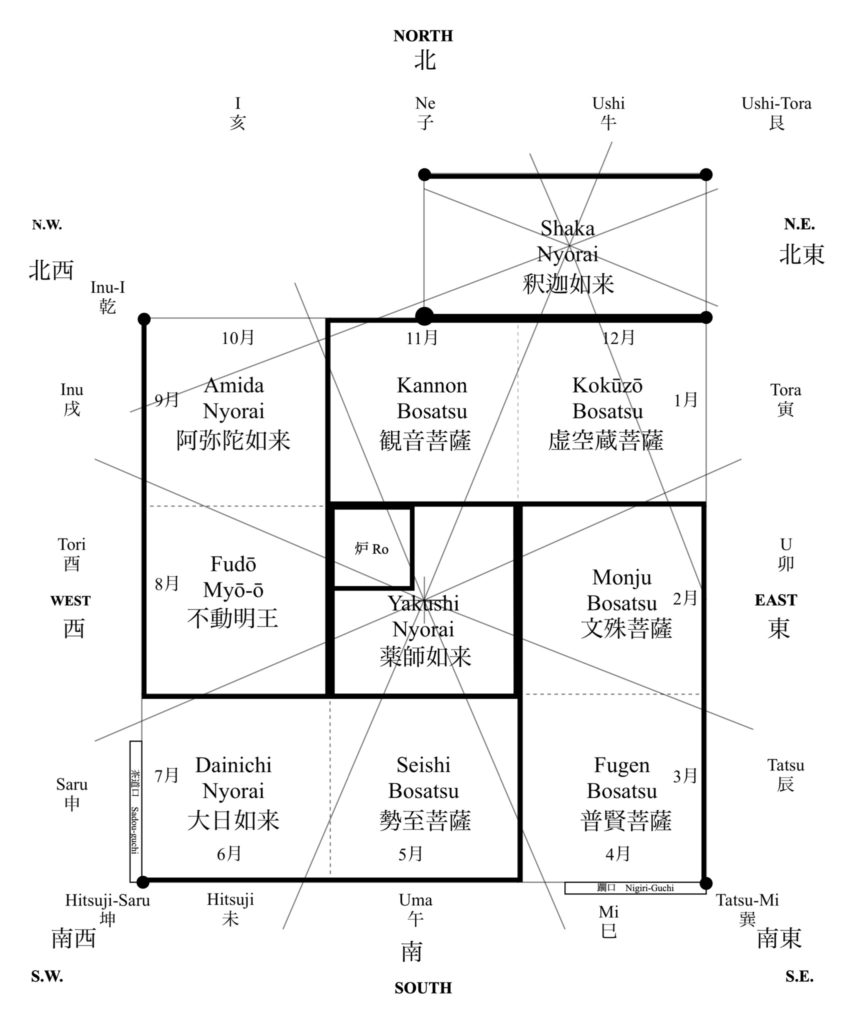 The signs of the Amida and Kannon join within the half-tatami that is identified with Amida, so that the influence of Kannon in the 11th month is foreshadowed in the 10th month. The ro, 炉, hearth, is covered over during the fu-ro, 風炉, wind-hearth, warm season which ends on the first Boar day of the 10th lunar month, which corresponds to early November. In the diagram, the ro is protected for the most part by Amida’s influence, however, Kannon’s influence covers a part of the ro.

In Japan, in the 10th month, Shintō deities leave their shrines throughout the country, and assemble at Izumo Tai-sha, 出雲大社, Out-cloud Great-shrine. Buddhist deities stay in their temples, and in Chanoyu, the furo is set in the middle of the tatami, and may have Buddhist influences. Ro-biraki, 炉開, hearth-open, occurs on the first I no Hi, 亥の日, Boar ’s Day, of the 11th month, November. Amida is the Buddhist guardian of the sign of the Boar. The following day is a Ne no Hi, 子の日, Rat’s Day, which has Kannon Bosatsu as its Buddhist guardian. Kannon is embodiment of the mercy of Amida, and is a male deity in female form. She has not entered the ultimate paradise so that she can help guide souls to Amida’s western paradise of Jō–do, 浄土, Pure-land.

The return of Shintō deities on the Day of the Rat, or rather day of Kannon, may to a westerner evoke feelings of Halloween on the last day of October, and All Saints Day on the first day of November. Halloween is also called All Hallows Eve. It is believed that the festival began around 609 in Christian harvest celebrations. Robiraki is the time when the year’s ‘new’ tea is served, along with newly harvested rice and beans. Opening the ro on a Boar day, may be seen as an ‘eve’ of the Rat day, but especially dedicated to Kannon.

Opening the tea leaf storage jar, cha-tsubo, 茶壺, tea-jar, is to get the ‘new’ tea, and grind it to serve at the robiraki. Opening the chatsubo is called kuchi-kiri, 口切り, mouth-cut, from cutting the paper seal around the mouth of the jar. Customarily, the charcoal to build the fire in the ro is held in a dried, natural spherical gourd called a fukube, 瓠, Lagenaria siceraria. It is interesting to note the fukube gourd is related to the Halloween pumpkin. The gourd holds the charcoal to make a fire, and the pumpkin holds a burning candle. 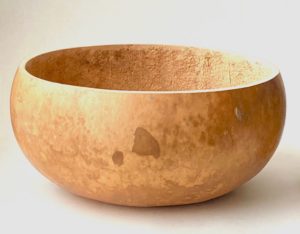 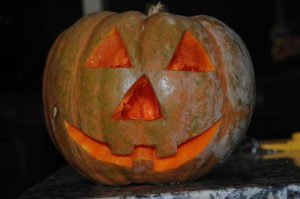