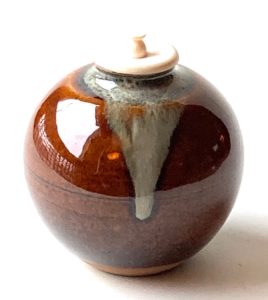 In Japan, some objects of Asian origin from outside of Japan are called Karamono, familiarly implying that they are from China or Korea.  In Chanoyu specifically, highly prized tea containers are said to come from China, and likewise are called Kara-mono, 唐物, Kara-thing. Kara is the Japanese name for the Tang, 唐, dynasty in China. In general, the word kara refers to China and foreign. Kara, 韓, is also the name for an ancient kingdom in southern Korea.

I believe that kara specifically means ‘foreign,’ as do many Japanese people. After years of research, I also believe that kara meaning ‘foreign’ refers to the Sanskrit language. The Sanskrit word kara has more than sixty meanings: tribute, syllable, make, become, endeavor, you do, do, you become, observe, practice, letter [character], word, the palms, perform, bestow, show, cause, you are writing, explain, make, etc. A familiar Sanskrit phrase is kara-amṛta, hands-nectar, and ‘Krishna’s restless palms resemble lotus flowers’. One might observe that the possibilities finding the specific meaning of kara in association with a kara-mono in Japan is endless.

In Chanoyu, tea powder for making koi-cha, 濃茶, thick-tea, is temporarily kept in a small ceramic jar ceramic jar called a cha-ire, 茶入, tea-receptacle. There are many types of chaire, but they are customarily divided into two categories; Wa-mono, 和物, Harmony-thing, and Kara-mono, 唐物, Tang-thing. In the Japanese language, the Kanji for the word wa, 和, in wa-mono, refers to Japan, so that Wa-mono, means a Japanese thing. The meaning of the word wa is harmony, but has become synonymous with ‘Japan’. It is recorded that the chaire originated in China, and that tea seeds were brought from China to Japan in a small ceramic jar by the Japanese Buddhist priest, Ei-sai Zen-ji, 栄西禅師, Splendor-west Zen-master, in the 12th century. Eisai also introduced Chan, 禅, Meditation, Buddhism to Japan, where it is called Zen.

When handling a chaire, it is purified by the host with a square of silk cloth called a fuku-sa, 帛紗, cloth-gauze. The folded fukusa is held against the side of the jar which is turned around three times. When purifying a Karamono chaire the jar is turned clockwise, whereas when purifying a Wamono chaire the jar is turned counter-clockwise. For years upon years this difference puzzled me, and prompted me to find out why. That lead me to researching the actual meaning of kara. As Tea and Buddhism are so closely related, perhaps kara had/has something to do with aspects of the faith. Turning the chaire around to purify it may have some association with Buddhist prayer wheels which are turned around when praying and seeking blessing. Such wheels originated in Tibet.

In Japan, the Buddhist prayer wheel is a ma-ni-sha, 摩尼車, rub-nun-wheel. Some wheels are metal cylinders held upright on a spindle, and have writing on the outside of the drum. Rolls of paper prayers are held within, so that by turning the wheel it is as though one is reciting the prayers. Writing is usually in Sanskrit, which is read from left to right like English. The Sanskrit wheel is turned clockwise. Wheels with Japanese written on the side of the drum are read from right to left, so that the wheel is turned counterclockwise. Buddhist temples keep sacred writings, and some have a separate structure for their storage, a library of sorts. This building is called a kyō-zō, 経蔵, sutra-keep.

The character for sutra, 経, in Japanese is kyō and gyō in combination, however it has several other readings. The character’s true meaning is a thread that passes through bamboo or paper pages to form a kind of book.  The word sutra has the same origin as suture, the thread that holds skin together in an operation. These books in China were often regarded as classics, and many are sacred writings called by the Indian word sutra.  The I Ching, Eki-kyō in Japanese, may be called the Change-sutra.  Cha Ching, Cha-kyō, in Japanese, is the Tea-sutra.

The character, 蔵, zō, means keep, treasure, store in the sense of keep, etc. Within the structure is a large library kept in a large cylinder wa-zō, 輪蔵, ring-keep, that is intended to be turned with the intention of reciting the sacred texts. This is the equivalent of the manisha. The carousel-like library is turned counterclockwise following the manner of reading Japanese from right to left. Turning the Buddhist prayer wheel: the benefits attributed to the practice of turning the wheel are vast. Not only does it help wisdom, compassion and desire for enlightenment arise in the practitioner, it also enhances deep awareness and pursuit of knowledge. The practitioner can repeat the mantra as many times as possible during the turning of the wheel, stabilizing a calm, meditative mind.

In Chanoyu, it is understood that the chaire filled with tea is symbolic of the sun, Tai-Yō, 太陽, Great-Yang. The chawan is the moon, Tai-In, 太陰, Great-Yin, the mizusashi the stars, the universe. At the death of the Buddha, the cremation fire would not ignite, for three days. One of his closes followers, Kassapa, in Japanese, Ka-shō, 迦葉, (sound)-leaf, arrived late and wanted to see the Buddha, and was told he was dead. The coffin was opened, the Buddha stood up, and delivered one of his greatest teachings. He laid back down and the fire ignited.

At the end of a practice session, there is a Tibetan Buddhist tradition of dedicating any accumulated merits that one may have gathered during practice to the benefit of all sentient beings. Then one utters Ah Om Hum three times. Buddhists utter ‘Ah’ with thoughts of the beginning of the name of A-mi-da, 阿弥陀, Praise-increase-steep, the Buddha of Compassion.

This is customary with Tibetans upon completing any Buddhist practice, including the practice of the prayer wheel. The finial at the top of some prayer wheels is in the form of a mani gem, hō-ju, 寶珠, and 宝珠, treasure-jewel.  This gem is the metaphorical combination of water and fire, Yin and Yang, In, 陰, negative, and Yō, 陽, positive.  It is also called the Wish-granting Jewel. It is found in Buddhism and Shintō.  In Shintō, a familiar object is a spherical water vessel with a pointed lid that resembles the hōju, and is called mizu-tama, 水玉, water-gem.

There are chaire that have been made in the form of a hōju. Several forms of chaire that have been identified as Karamono are the bun-rin, nasu, bun-na, and maru-tsubo. The bunrin most closely resembles the hōju, as it is spherical.  Bun-rin, 文琳, literary-jewel. The word bun is written with the character, 文, which also means letter, polished, refined, sentence, literature, style, art, decoration, figures, plan, etc.  In a Chinese quotation, there is reference to the ‘ancestral pearl’, 文琳, which was made of celadon. It should be remembered that tea has been regarded as a potent medicine with multiple beneficial uses.

Other medicine containers include, ya(ku)-ko, 薬壺, medicine-jar, which is held on the palm of the left hand of Yaku-shi Nyo-rai, 薬師如来, Medicine-master Become-arrive, the Buddha of Healing.  He is typically depicted seated, wearing the three robes of a Buddhist monk, holding a ru-ri, 瑠璃, lapis lazuli, -colored jar of medicinal nectar, Amrita[?], on his open left palm. The word lapis is from Latin for stone, and lazuli from Persian meaning heaven for its deep blue color: stone heaven.

The English word topaz is from Greek, topazion, for a type of gemstone, probably after Sanskrit, tapas, meaning fire, alluding to the brilliance of gem-quality material. Also, on the origin of the word topaz, elsewhere, it is noted that the word topaz comes from Topazos the old name of St. John’s Island in the Red Sea in southern Egypt. Orange topaz, also known as precious topaz, is the traditional November birthstone, the symbol of friendship, and the state gemstone of the US state of Utah.

The healing aspects of the topaz are that it soothes, heals, stimulates, recharges, re-motivates and aligns the meridians, chakras, of the body, directing energy to where it is needed most. It promotes truth and forgiveness. Topaz brings joy, generosity, abundance, and good health. It is known as a stone of love and good fortune.

Orange is a very sacred color throughout India, as manifest in saffron-colored robes, etc. Imperial topaz is yellow, pink (rare, if natural) or pink-orange. Orange topaz, also known as precious topaz. In my collection of Tea utensils, is a bunrin chaire made in Ko-ishi-hara, 小石原, Small-stone-field, Taka-tori, 高取, High-take, in Kyū-shū, 九州, Nine-states, by Fuji-saki Ju-zan, 藤崎寿山, Wisteria-cape Longevity-mountain, 13th generation.  The glaze of the jar is glossy orange, which is a hallmark of Taka-tori yaki, 高取焼.  The glaze does truly resemble the lustrous orange topaz.

It is said that the shape of the hōju represents those of urns for Buddha bones, or that a hōju is the beautiful ball-shaped gem that was said to have come out of a dragon god, and that a hōju is placed on a palm of Buddhist statues, for example those of Ji-zō Bo-satsu, 地蔵, Earth-keep Sacred tree-buddha. 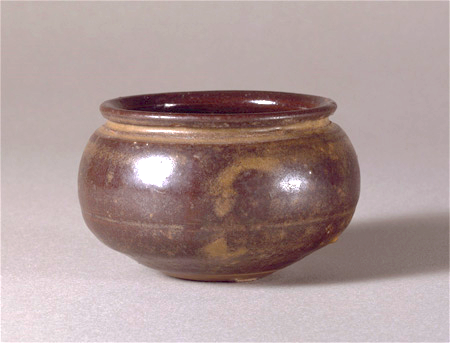 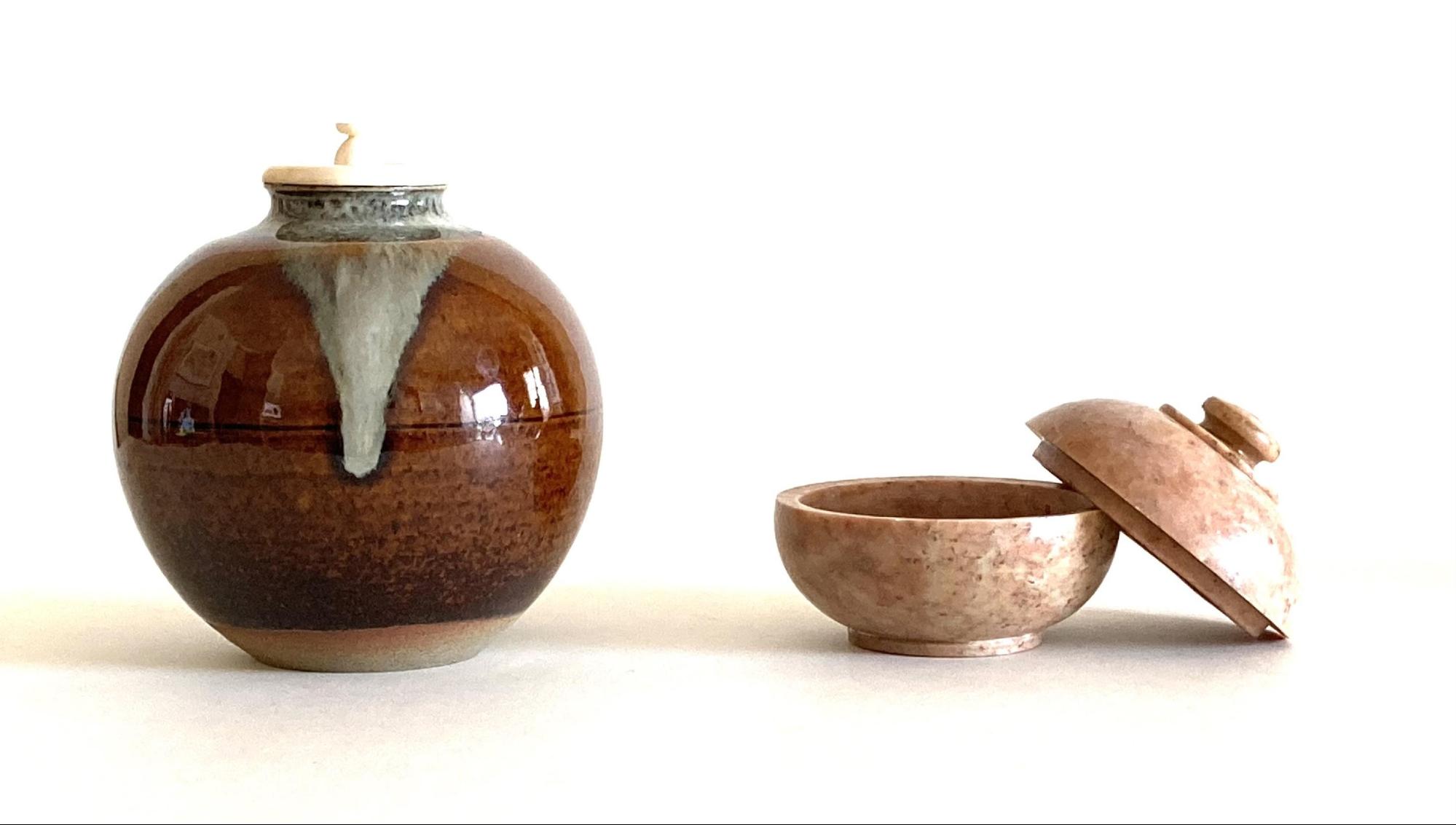 Kaki no heta cha-ire, 柿の蔕茶入, persimmon’s calyx tea-receptacle, is a ceramic jar brought from China to Japan by Eisai, contained tea seeds. Because of its large open mouth, the jar is called a ‘dai-kai’, 大海, great-sea. Note the slight groove around the middle of jar, which may be intentional or accidental. An incised groove around tea jars, which is more pronounced with the spherical bunrin chaire. This may be identified with the stone reliquary of the Buddha’s remains, which is spherical, and with the top half as a lid to the container, as illustrated by the small stone lidded container made in India.

Eisai also introduced Zen practice to Japan. The jar is owned by Kō-san-ji, 柿蔕茶入, High-mountain-temple, Kyōto, 京都, Capital-metropolis. Eisai was the priest of the temple, and it was the place where he planted the tea seeds, creating what was called hon-cha, 本茶, true-tea.