Chanoyu and the Mirror

In Chanoyu, water is moved with a hi-shaku, 柄杓, handle-ladle, that is made of aged take, 竹, bamboo. The cup is called a gō, 合, join, and the handle is e, 柄. The handle retains the fushi, 節, node, located near the middle of the handle. There are essentially two types of hishaku. The sashi-toshi, 差通, distinct-through, which is the original style with the handle penetrating the side of the cup, and held with a tiny peg. The other type is called tsuki-gata, 月形, moon-shape, where the curved end of the handle is held in side of the cup creating a crescent likened to the moon. 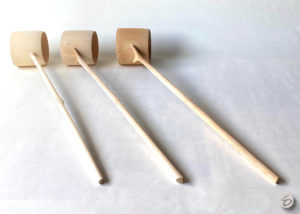 When water fills the hishaku cup, there may be a reflection of light on the surface of the water, transforming the circle of water into a mirror. This may be the true ‘mirror’ of the hishaku. The mirror is the sacred emblem of Amaterasu, which figured in she concealed herself in the cave of heaven, and sealed the entrance with a great stone. The world in darkness, the myriad gods assembled to get her to come out. Ame-no-uzume-no-Mikoto, 天之鈿女の命, Heaven’s-turning-woman, danced on an over-turned sake barrel, which caused an uproar of laughter in the crowd. Curious, Amaterasu moved the stone away. The gods attempted to appease her with gifts of a mirror, a sword, and strings of curved jewels. These became the imperial regalia signifying rule over the realm.

This is one of the reasons why the mirror is some important in Shintō. Sake is drunk on auspicious occasions, and to mark the occasion, a barrel of sake has its lid broken open to get to the sake. This is called kagami-biraki, 鏡, mirror-open. Although the wooden lid may be likened to a mirror, it is surely the reflective, mirror-like surface of the sake within the barrel. Uzume’s dance on the over-turned barrel, indicates that the sake must have been drunk by the gods. Sake offered to Amaterasu would never have been simply spilled upon the ground. The curved fan-like end of the handle that held in the wall of the cup is called a ke-ra-kubi, 螻蛄首, mole cricket-neck, which is a technical term used in carpentry. It is very interesting to note that Sen no Rikyū had a signature ka-ō, 花押, flower-seal, called the ke-ra-ban, ケラ判, mole-cricket-sign. The manner in which Rikyū wrote his name Sō-eki, 宗易, Sect-change, resembled the mole cricket. It may be that the Japanese people have always had very little aversion to insects: certain kinds are kept as pets, others are eaten and most are models for artists.

When making tea, the tei-shu, 亭主, house-master, takes up the hishaku for the first time, and holds it upright with both hands in such a manner that is called kagami bi-shaku, 鏡柄杓, mirror handle-ladle. The handle is held with the left hand at the fushi, with the open side of the cup perpendicular to the floor, and about the length of the hishaku distant from the chest, about the level of the heart. Identifying the cup as a mirror, is that it is to reflect one’s heart, and not one’s face.

When preparing tea, there are two containers of water, the kama and the mizusashi. Both must have their lids removed to get to the water. One might think that the revelation of water in the vessels, may be likened to the kagami-biraki of the mirror of Amaterasu.

To my knowledge, there is no official comparison between handling the hishaku in the manner of kagami bishaku and the term kagami biraki, 鏡開き, mirror opening, which occurs on the eleventh day of the first month of the year. Kagami biraki is the breaking open of the kagami mochi, 鏡餅, mirror rice cake, displayed during the New Year festivities.

In Kyōto, and other places were old traditions are maintained, people bring kagami-mochi offerings to their teachers on the 13th day of the 12th month, on a day that is called Koto-hajime, 事始め, matters-begin. Koto-hajime is the start of preparations for the New Year festivities. The Kagami mochi are officially ‘opened’ on the 11th day of the first month. The Buddhist deity whose Ennichi is on the 13th day of each month is Ko-kū-zō Bo-satsu, 虚空蔵菩薩, Empty-void-keep Sacred tree-buddha, who is bestows wisdom. Kokūzō is the Buddhist deity who blesses girls at the age of 13, becoming adults during the observance of Jū-san Mairi, 十三参り, ten-three shrine visit, held on the 13th day of  the 3rd month.

The number of days from Koto-hajime to Kagami-biraki is 28 days, or four weeks, about one month. Mochi is eaten as an essential part of the New Year’s meals, so additional mochi must be made for the New Year display, and for the Kagami biraki on the 11th day.

The mochi must be broken with a wooden mallet, just as the mochi was made by pounding rice into a single mass, so the mochi must be pounded into little pieces to be eaten.  Mochi, after sitting eleven days, turns from pliant softness to a kind rock.  Perhaps this mochi may evoke the rock that Amaterasu used to block the entrance to the cave of heaven in which she concealed herself. Mochi is readily made edible by toasting it over a fire, or boiling in water.

In Japan, there is an event that coincides with kagami-biraki, breaking the mirror mochi, on the 11th day of the New Year, and that is kura-biraki, 蔵開, warehouse-opening. This is not just any kura or warehouse, but a sake brewery. When the new sake has been made and ready to drink, the brewery is open to the public to enjoy and sample the new sake. Opening a sake barrel, saka-daru, 酒樽, sake-barrel, is called by the same name as opening the mochi, kagami-biraki, 鏡開, mirror-opening.

What is the importance of the eleventh day of the lunar calendar? There is a Vedic observance in India called Ekadashi, eleven, which occurs every month on the eleventh day after the new moon and eleventh day after the full moon. One is the light fortnight, the other the dark fortnight. These are days of fasting. It is believed by many cultures that certain phases of the moon have immense influence on the human body. There is some popularity of ‘Ekadasha’ in Japan, although according to Indian tradition, rice is not to be eaten just prior to the time of fasting. This may rule mochi out of the procedure, unless the mochi is eaten after the fast.

The number eleven in Japan is associated with Kan-non Bo-satsu, 観音菩薩, See-hear Sacred tree-buddha. One of her thirty-three manifestations is the Jū-ichi-men Kannon, 十一面観音, Ten-one-faces Kannon, and as such is identified in Japanese as Ekadasha Kannon, using the Hindu term for ‘eleven.’ This much-loved deity is much less peculiar than her name implies, as she has upon her head a crown composed of ten heads that can reach all ten directions. Odd numbers are Yō, positive, and even numbers are In, negative, as they can be equally divided in half.

Another of Kannon’s thirty-three manifestations is the Sen-ju Kannon, 千手観音, Thousand-hand Kannon, who also has eleven heads. Senju Kannon is the guardian of the north and has influence over the yojōhan chashitsu, especially where the seat of the sensei in the tearoom in front of the tokobashira. The tokobashira is identified with Kannon, as is the hook at the back wall of the tokonoma where a scroll is hung and flowers in water are displayed. A mirror is one of the many things held in Kannon’s thousand hands. There is an image of Kannon depicted on a hanging bronze mirror that is called a kake-botoke, 掛仏, hang-Buddhist spirit.

The two pieces of mochi are said to represent the sun, Ama-terasu Ō-kami, 天照大神, Heaven-brightener Great-god. When the mochi is displayed at the New Year, it is hoped that her spirit will enter the mochi, so that one will be enriched by that energy when eaten. Mochi is made by pounding sweet rice into a single mass with a wooden kine, 杵, pestle, in a wooden usu, 臼, mortar. This is called mochi–tsuki, 餅搗き, mochi-pound. The word ‘mochitsuki’ is also written, 十五月, ten-five-moon, which also refers to the full moon, which is the 15th night.

The mirror is identified with Kannon, especially Sen-jū Kannon Bosatsu, 千手観音菩薩, Thousand-hand See-sound Sacred plant-buddha, is the Hō–kyō 宝鏡, Treasure-mirror. The mirror and the moon have been closely allied for ages, especially with its reflection on water, and with Kannon. Her mirror draws forth intelligence to liberate the mind.

The kagami mochi is broken on the eleventh day of the first month. The full moon is on the fifteenth day, which is four days later. Seven days after the eleventh is the eighteenth day. Each day of the month has a Buddhist deity that is honored on that day, that is called an en-nichi, 縁日, relation-day, and the eleventh day of each month is the Ennichi of Kannon Bosatsu. The eighteenth day of the first month of the lunar calendar is first day of the New Year to venerated Kannon on her Ennichi, and is called Hatsu Kannon, 初観音, First-Kannon. It may be that the kagami-biraki is in some way connected to Kannon. According to Japanese customs, a major event, such as O-bon, お盆, Hon.-tray, when spirits of the dead return to their homes, is preceded by Tana-bata, 七夕, Seven-night, which is observed seven days earlier. Tanabata is a purification ritual preparing for Obon.

One of the thirty-three manifestations of Kannon is the Mochi–ren Kannon or Ji-ren Kannon, 持蓮観音, Hold-lotus Kannon, who holds in her left hand a lotus but on the end of a long stem. Her name is also Hasu-mochi Kannon, 蓮持観, Lotus-hold Kannon. There is a yearly tradition in Kami-no-yama, 上山, Above-’s-mountain, in  Yama-gata, 山形, Mountain-form, called Taka-matsu Kannon Mochi-tsuki, 高松観音餅搗, High-pine Kannon Mochi-pound, when, on New Year’s Eve, a group of men pound mochi in an usu, 臼, mortar, and when completed, they raise the mass of mochi on the ends of their pine wood poles up into the air, amid great acclaim by the assembled crowd. Regardless of the actual number of poles, they symbolically represent one thousand poles. The event is dedicated to Kannon, who is venerated at the Buddhist temple of Taka-matsu Kō-myō–in, 高松光明院, Tall-pine Light-bright-sub temple, and perhaps to the Thousand-hand Kannon. The mochi is then eaten by those attending the event.