Chanoyu and September in Japan

One of the old names for the ninth month is Naga-tsuki, 長月, Long-moon, as people spent a long time looking for and at the ‘harvest moon’.

According to the kyu-reki, 旧暦, old-calendar, the lunar calendar, the second full moon is ideologically the same time as the vernal equinox, Shun-bun, 春分, Spring-divide. The lunar months have names which have been used for the solar months, even though lunar events should occur close to solar events.

The second moon is identified with the zodiac sign of the U, 卯, Hare. The Kanji 卯, was based on an old variant, 戼, like an open door, mon, 門, gate. This character was found in oracle bone scripts depicting a sacrifice of a human or animal body that is cut in half.

In Buddhism, the full moon of the second lunar month is the death and nirvana of the Buddha, called Ne-han, 涅槃, Black soil-tub. This coincides ideally, although rarely, with the vernal equinox, Shun-bun, 春分, Spring-divide.

The east is where the sun rises, and is in a sense reborn. The sun is the emblem of Ama-terasu, 天照, Heaven-brightener, the supreme sun goddess of Shintō. Sacred to Amaterasu is the chicken, niwatori, 鶏, that beckons her arrival in the morning. Emblematic of the sun is a three-legged black crow called the Ya-ta garasu, 八咫烏, Eight-span crow. Yata is symbolic of Infinity in Space. The entrance to a Shintō place is a tori-i, 鳥居, bird-sit.

The origin of the tori-i and its name remain obscure. However, the sign of the second month is u, 卯, is based on the character 戼, that is like a mon, 門, gate, and the tori-i is a gate. Although a symbol of Shinto, some Buddhist temples have tori-i.

The Kanji for east, higashi, 東, is thought to represent the sun, hi, 日, rising behind a tree, ki, moku, 木. Some authors disagree. For those who identify ‘tree’ in the Kanji for east, the tree is the mulberry. From the Chinese point of view, China is the center of the world, and every other place is in relationship to it. The word ‘japan’ has its origin in the Kanji, ni-ppon, 日本, sun-origin, which, in Chinese dialect pronounced ‘jippan’. From China’s point of view, Japan is where the sun rises.

From early times, the Chinese called Japan, Fusang, 扶桑, Assist-mulberry: Japanese, Fu-sō, 扶桑. Fusang is a mythical tree that grows in the east, which is also identified as a kind of hibiscus. The word fusō may be the origin of the word sō-mon, 桑門, mulberry-gate, that refers to Buddhist priests. The Kanji, 桑, is also read kuwa. 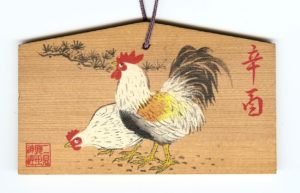 The Kanji for west, nishi, is 西. The zodiac sign for the eighth lunar month is tori, 酉, bird. It is apparent that there is some connection between the two Kanji, nishi, 西, and tori, 酉. Both characters and their origins are controversial.

The Kanji for zodiac tori, 酉, bird, is based on an ancient Chinese vessel used in making and storing fermented millet alcoholic drink: 丣. It is remarkable that the original Kanji for the zodiac hare, u, 卯, 戼, and bird, 酉, 丣, have similar forms, however, one character appears to be open and one closed. Sacrifice is associated with the open character, 戼, which implies there may also be sacrifice associated with the closed character, 丣. 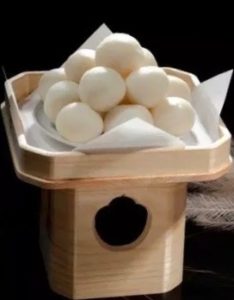 There may be a remote possibility that these two rounded mounds of the kagami mochi could be intended as offerings, one to the sun and one to the moon, particularly in the lunar 8th month. The eighth moon is in Japan the Harvest Moon, and it celebrates the new rice by making some of it into mochi.

The birds of Amaterasu’s – her chicken or the sun’s crow, both move, and fly from the east to the west. The moon’s hare sets in the west, and through the night makes its way to the east to become the zodiac hare of the east. There is an old expression: u-hi to-sō, 兔走烏飛, hare-runs crow-flies. White chicken, black crow.